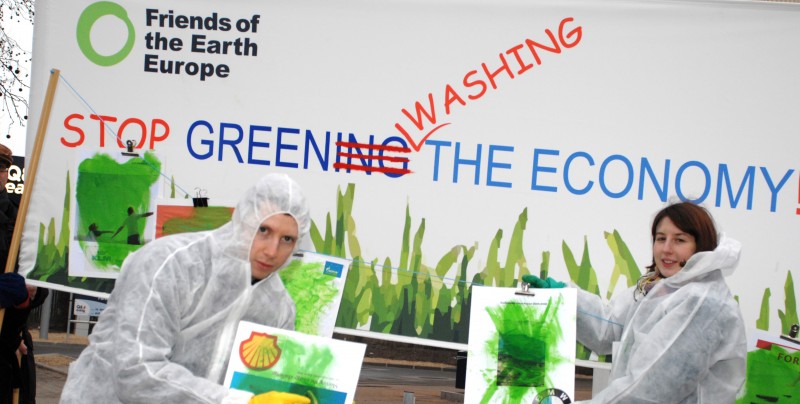 Brussels/Netherlands, July 5th - The Dutch Advertising Authority has instructed oil giant Shell to stop misleading the public, after Friends of the Earth Netherlands filed a complaint against a "greenwash" advertisement that claimed that Shell uses their waste carbon dioxide to grow flowers.[1]

The advertisement, published in a number of newspapers and magazines in April and May, depicted a refinery emitting flowers from its chimneys instead of smoke.[2] The Dutch Advertising Authority confirmed that this was a misrepresentation, since only a tiny proportion of Shell's total carbon dioxide emissions is piped into greenhouses. Friends of the Earth Netherlands was informed of this on July 4th.

Anne van Schaik, campaign leader of the Globalisation Department at Friends of the Earth Netherlands said: "Instead of greenwashing its environmental behaviour, Shell should tackle its real problems. For instance, in Nigeria, gas flaring by Shell causes 60 times more greenhouse gas emissions than the carbon dioxide that is reused by Dutch farmers to grow flowers."

Shell also claimed in the advert that it uses its 'waste sulphur to make concrete'. The Dutch Advertising Authority also qualified this claim as misleading because this could be interpreted as applying to all of the waste sulphur generated by Shell. In reality, a major part of Shell's sulphur waste is used for fuel for sea ships and is finally released in the air. Sea ships are one of the biggest sources of sulphur dioxide pollution.

The Shell advertisement appeared in several western European countries. In England and Belgium, Friends of the Earth filed similar complaints. In England the case is still pending, but in Belgium the claim was rejected by the Advertisement Authority.

Paul de Clerck, head of the Corporates campaign of Friends of the Earth Europe said: "In the advertisement Shell used strongly misleading environmental claims. The fact that the Belgium Advertisement Authority didn't see any problems clearly underlines the need for strict European-wide rules to prevent greenwashing advertisements by multinational companies such as Shell."

Notes:
[1] More information about the complaint

[2]The Shell advertisement can be found at Shell's website