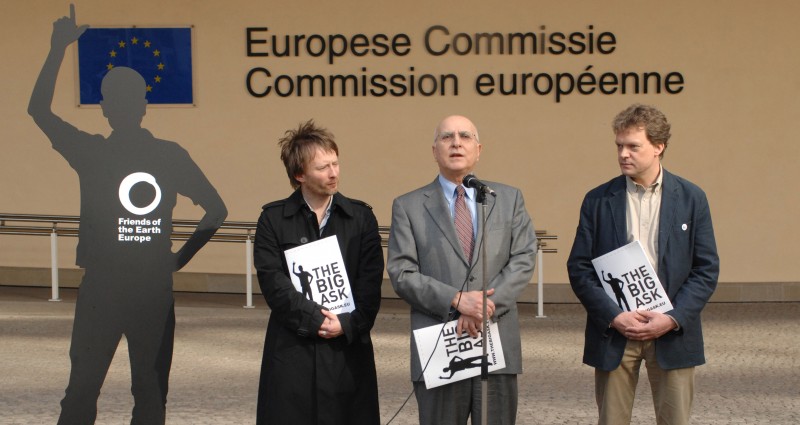 Brussels, February 27 - A Europe-wide climate campaign launched today by Friends of the Earth Europe and the Radiohead frontman Thom Yorke aims to get governments and the European Union to commit to annual cuts in emissions to fight climate change.

The Big Ask brings together Friends of the Earth groups from 17 European countries [1] each of which is asking its government to introduce legally binding annual emission cuts. Together they are asking the European Union to force all member states to cut their emissions year-on-year.

Click on the image to watch highlights of the launch of the Big Ask in Europe.

Thom Yorke launched the European campaign in Brussels where he presented a symbol of the Big Ask to the European Environment Commissioner, Stavros Dimas. Thom Yorke has supported the Big Ask campaign in the UK where thanks to two years of campaigning from Friends of the Earth, a ground- breaking climate change bill is currently being made law. Now he is bringing the campaign to the rest of Europe.

Thom Yorke said: "We will never wake from the nightmare of climate change unless our national governments and the European Union act. They are the ones who will write the laws that we must follow as citizens and in business. They are the only ones who can put the structures in place that will help us tackle climate change. That is why we are launching the Big Ask in seventeen countries in Europe. By committing to annual cuts in our emissions at a national and European level we can play our part in tackling climate change, and hopefully set an example for the rest of world to follow. Hundreds of thousands of people want to see their governments doing more about climate change. If you are one of them then find out more about Friends of the Earth Europe's Big Ask campaign in your country at www.thebigask.eu."

Around Europe people are being asked to send a message to their politicians asking them to commit to annual cuts in emissions. Individuals can find out more about their national campaign at the Big Ask website which is also being launched today: www.thebigask.eu

Different activities took place across the continent to mark the start of the European campaign. In Finland activists raised awareness with snowman rallies in 22 towns and cities while in the Netherlands activists built a dyke in front of the parliament building and invited politicians and celebrities to fill the gaps with sand-bags.

At a European level Friends of the Earth Europe wants to see annual emission reductions for all member states and a strong compliance system to guarantee that these cuts really take place [2].

Martin Rocholl, Chair of Friends of the Earth Europe said: "It is too easy for Governments to ignore long term targets on climate change. Annual targets will make today's and tomorrow's politicians accountable for cutting emissions and pressure them to actually deliver. The European Union also needs to put forward a strong penalty system to make sure countries really meet their targets every year and the cuts we urgently need really happen. Taking real action is a great chance for Europe to lead the world in the fight against climate change and to show how countries can boost their economies, stay competitive, create jobs and improve the environment at the same time."

"Through the Big Ask, people across Europe will be able to call on their governments and the European Union to act against climate change. As a grassroots network Friends of the Earth is uniquely placed to generate this kind of people power and really make politicians sit up and listen."

[2] The current proposals of the EU for their emission reduction policies until 2020 (an amended Directive for the Emissions Trading Scheme (ETS) and a Decision on effort-sharing amongst EU Member States about non-ETS emissions) foresee a linear path with annual emission reductions. But neither proposes a specific direct compliance and penalty provisions against Member States if they fail to deliver. The effort-sharing directive is particularly weak on enforcement and compliance. Under this proposal EU Member States are only required to report their progress towards their reduction targets.

Friends of the Earth is calling for these EU climate proposals to be amended so that the European Commission can use the strongest enforcement tools available to it, including direct penalties towards Member States. The reporting about emission reductions in the Member States should be speeded up and take place every year. An independent agency should be set up and put in charge of compiling emission data from Member States, monitoring the advancements of the Member States towards their emission reduction targets. It could also have the power to manage the fund raised by the direct penalty procedure proposed.

[3] The EU has agreed to cut domestic greenhouse gas emissions by 30 per cent by 2020 but only if an international agreement is reached. The proposal for 30 per cent cuts, and that for 20 per cent cuts, includes the possibility for governments and industry to offset their emissions with a high number of climate projects outside the EU. No quality standards are given for these projects. Many projects, for example from the Clean Development Mechanism (CDM), are strongly criticised by NGOs for not delivering the stated emissions cuts or for causing harm to people and the environment. See http://www.oekoinstitut.de/oekodoc/622/2007-162-en.pdf

The Big Ask is calling for domestic emissions cuts that amount to 30 per cent by 2020, instead of governments taking part in projects through e.g. the Clean Development Mechanism (CDM) and then 'counting' this as their own emissions reduction. Any external emission cuts should only be in addition to the 30 per cent of domestic reduction and only be allowed if it is guaranteed that real emission cuts take place and that the emissions reductions contribute to sustainable development and do not cause any social or environmental damage.