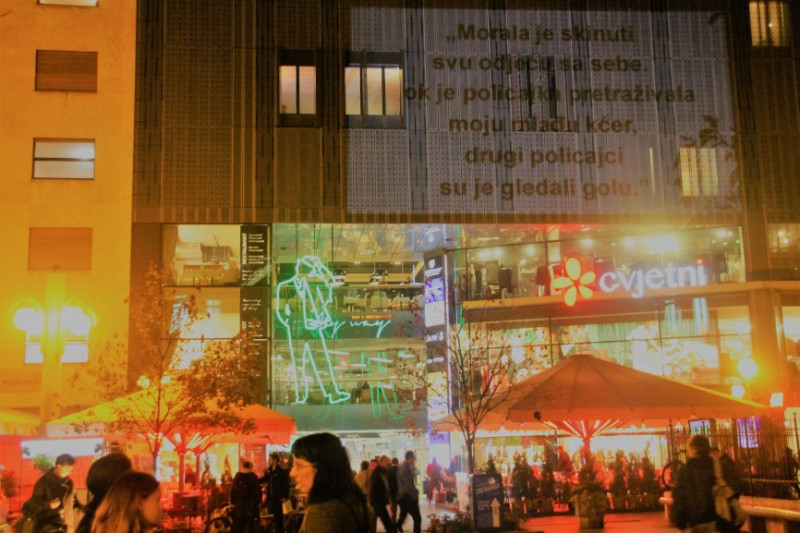 Border violence is a crime, solidarity is not

Since 2015, Zelena akcija/Friends of the Earth Croatia has been involved in the national Refugees Welcome Initiative. Together they have been organising numerous activities to fight increasing xenophobia in the media and public on one hand, and police border violence towards refugees, criminalisation of solidarity and human rights activists on the other. In a joint guerrilla action last week, refugees' testimonies shook up Zagreb's citizens. Marija Mileta from Zelena akcija/Friends of the Earth Croatia and the „Welcome!” Initiative tells us the whole story.

Why did Zelena akcija decide to join the Refugees Welcome Initiative in Croatia?

Zelena akcija attended the kick-off meeting of the “Welcome” Initiative in 2015, together with over 40 other organisations from all over Croatia and many volunteers. Our work at Zelena akcija is aimed at environmental and social justice as well as solidarity. We've always worked closely with social justice organisations in Croatia, supporting each other. With hundreds of thousands of refugees coming through the Balkans, in need of humanitarian help, it was a simple decision to join the initiative. We also wanted to pressure Croatian and EU institutions to change restrictive migration policies, and to raise public awareness about refugee rights, including safe movement.

What exactly have Refugees Welcome Initiative and Zelena akcija been doing?

Initially, the “Welcome!” Initiative gathered more than 60 civil society organisations from all over Croatia, one football club and more than 400 volunteers who gave daily support to refugees on the ground. The Initiative had a few working groups focused on legislation, activism, humanitarian work, legal work, etc. After the closure of the so called „Balkan route” in 2016, which had enabled between 600,000 and a million people (official numbers differ) to cross into the EU, the initiative shifted its focus more on integration of refugees who were seeking asylum. Zelena akcija has been involved in both humanitarian help and organising actions advocating to keep borders open. We also have some regular activities focused on integration like our bicycle workshop which repairs bikes and donates them to refugees in Zagreb. Now we are very much involved in actions against border violence and xenophobia in the public discourse, as well as criminalisation of solidarity.

What makes you think that xenophobia is on the rise in Croatia?

After the closure of the „Balkan route” and when EU countries like Austria and Germany started deporting people to Croatia (on the basis of the Dublin regulation), the political and media narrative started to change - not only in Croatia, but in the whole of Europe. „Refugees in need of help” became „illegal migrants we need to protect our borders from”. Both traditional and social media have become a hub for spreading fake news that results in panic and hatred. This has been escalating in Croatia in the past months, thus we felt a strong need to write an open letter as a reaction. The letter has been signed by over 900 people from activist, media, art, academic and other circles in Croatia, as well as over 70 collectives, organisations, initiatives and editorial boards.

What cases of border violence have alarmed you?

For nearly three years, the Welcome Initiative and numerous other Croatian and international organisations have reported and warned of the violence faced by people on the move when their rights should be in line with national and international law. Those organisations have published several reports documenting „push-backs” of refugees by Croatian police into Serbia and Bosnia and Herzegovina, with testimonies of police violence at the borders. The recent UNHCR report “Desperate Journeys” states that around 2,500 refugees have been rejected from Croatia since the beginning of the year - 1,500 were denied access to asylum, while 700 reported violence and theft. Croatian police continue to publicly dismiss such accusations, discrediting evidence and failing to substantiate counter-evidence. As a result of the violent policy of border protection, on 21st November 2017, a 6-year-old Afghani girl named Madina died on train tracks, when her family was pushed back into Serbia; in May 2018, two children suffered gun injuries when the police fired at the van they were smuggled in; dozens have died trying to cross rivers and other dangerous paths. The police violence as well as the violence of the system towards refugees and anyone trying to help them is more than evident.

What was your performance in Zagreb about?

On November 7th, the „Welcome!” Initiative held a night guerrilla action in Zagreb city centre to raise public awareness on the violence that men, women and children experience on a daily basis at the Croatian borders. During the action we projected testimonies of refugees in public spaces which brought these, too often invisible, experiences closer to citizens. Persecution, violence, human rights violations are the reality in which refugees live every day, while their voices mostly remain silent, isolated and ignored. By showing in the very centre of the Croatian capital the stories and experiences of people who are at Europe’s “door”, we emphasised how these violations and persecutions are systematically perpetrated on people that are already underprivileged, which says a lot about the injustice in the whole society.

"She had to take off all of her clothes. While the police officer was strip-searching my younger daughter, the other police officers were looking at her, naked."

"Our bodies were shaking. It was cold, and we were wet as we crossed the river. But the police did not allow us to cover and warm up with the blankets we had. What Croatian police does is so cruel. Like we are not human beings. "

"The man began to cry, begging the police to help the people who were drowning. But police did not react."

These are just few of the shocking experiences of refugees that have been projected during the night guerrilla action. No passers-by could remain indifferent.

What do you hope to achieve?

The first step would be that decision makers and government institutions start to respect and transparently implement the international laws, regulations and directives that Croatia has accepted by joining the European Union. Of course, there is an ironic twist since the EU is pushing Croatia to keep its “doors” closed, leveraging entry into the Schengen zone.
Nevertheless, I believe there needs to be a unified mobilisation of civil society and social justice movements in the rest of Europe as we have seen a huge rise of the far right which is feeding itself on the hatred towards refugees and anyone who’s not white and Christian. This has happened before and we need to act while we still can. And lastly, with all the activities we do we hope to stop both the physical and systemic violence and violations of rights of refugees, citizens and activists. We want to avoid replicating in Croatia what is now happening in Hungary. Namely, the Hungarian Parliament adopted in June this year a series of laws that criminalise individuals and non-governmental organisations that help migrants and refugees. Likewise, Croatian authorities are already trying to punish individuals for helping “illegal” refugees. Recently a volunteer of the NGO “Are You Syrious?” was convicted with very weak evidence for helping a migrant group to illegally cross the Croatian border in March. He might have to pay a fine of over 8000 EUR, though the police asked for a much higher fine and a ban from working for “Are You Syrious?”, which the court dismissed. This is a textbook example of intimidation.
In these moments, more than ever, solidarity and a loud response is needed from society, in order to show our strong opposition to these violent policies that threaten human dignity and existence.