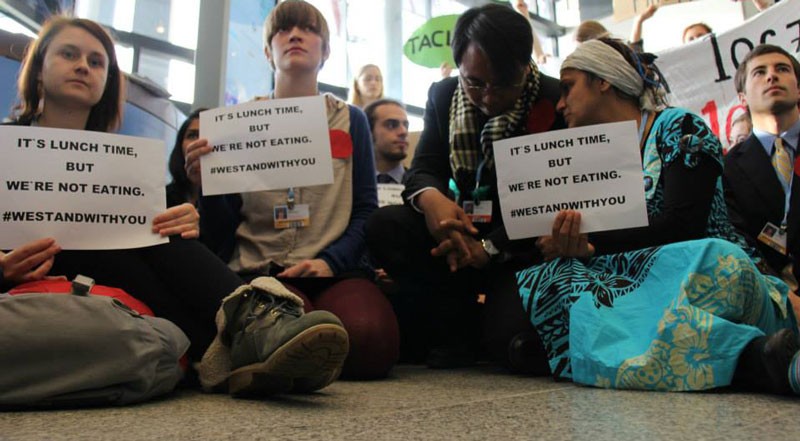 Activists join Jeb Sano, lead negotiator for the Philippines, in a solidarity fast

Written by Silje Lundberg, Young Friends of the Earth Norway activist at the UN climate talks

Last year, at the climate talks in Doha, the Philippine negotiator Yeb Sano moved a whole world with his speech and his tears. «Instead of getting ready for Christmas celebrations and our midnight masses, we may be counting our dead». The Philippines had just been hit by super typhoon Bophas that ended up taking the lives of 1100 people.

I was then, as I am now, a member of Young Friends of the Earth Europe. Yeb's words moved us as much as the rest of civil society, but what really engaged us and made us more dedicated then ever before was the red lines that the Philippines was drawing. They would not back down on their urgent demand for more ambition and more action from those responsible for the climate crisis, and they continued to be strong in the negotiations, in spite of the devastations at home.

This year another super typhoon has hit the Philippines, and this time they fear that thousands of lives have been lost in the colossal damages by typhoon Haiyan. Once again Yeb was forced to make his opening statement during the COP-plenary in the midst of all this suffering. At the end of his speech Yeb announced that we would go on a voluntarily fast - in solidarity with the people of his country and his brother who had managed to survive the storm. Many of who are now on the verge of starvation and unless this COP bring progress in the negotiations millions more will face a similar fate in the future. Yeb will be fasting for the entire two weeks of the conference.

In Doha we stood shoulder to shoulder with Yeb and the people of the Philippines. The youth stood with the Philippines and as the Doha climate talks stumbled to a close at 4am in the morning, the conference centre continued to echo with our support for those being impacted by the climate crisis: "If not us - who? If not now - when? If not here - where? Developing countries - we stand behind your red lines".

This year we continue our support, and we do it in all the ways at our disposal. If solidarity with the Philippines means us getting kicked out and banned from the COP - we will still do it. If it means organizing a solidarity fast - we will still do it. At the second day of the climate talks here in Warsaw we again stood shoulder to shoulder with the victims of climate change. The chanting "We stand with you" was again heard in the halls of the UNFCCC.

That is why I am fasting for the next two weeks: In solidarity with Yeb and the people of the Philippines and all the countless millions who we know will continue to see their families and homes devastated by climate change. we still stand with them, their strength is our strength and to send a message that that we, young friends of the earth will never accept a deal that is unjust or without equity and ambition. We cannot sign the death sentence to the 1000s of people in the frontline communities around the world.

What the world needs is climate justice, and we need it now.