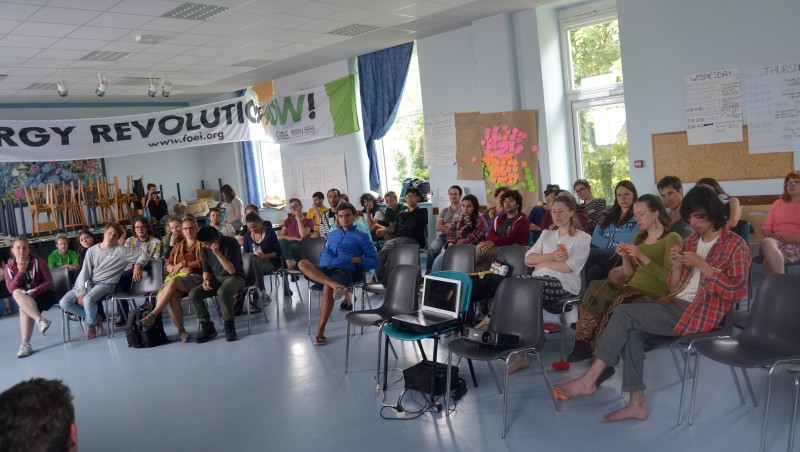 Thursday began with some challenging - but vital - discussions about the linkages between environmental and climate struggles, and those of race, class and gender - which Sydney from Ireland followed. After some time for reflection on what these truths mean for us and our movement, Kristina from the Czech Republic helped put together an amazing set of action materials for tomorrow's protest for community-run energy on a nearby island.

Here at the Young Friends of the Earth summer camp I'm staying at a campsite located a thirty minute walk away from the main building, so today like all days began with a dazzling walk through fields of wheat and corn, and ditches brimming with hydrangeas and wild flowers. I'm so grateful for this walk—which is beautiful at night too, when the sky fills with stars—because it reminds me of how much I love what the warming climate is endangering. So far, camp workshops have been intense but informative, and being among so many people committed to enacting positive change has been a wonderful boost for my own activism. It's really been fantastic meeting so many people from so many different countries all committed to working towards a better world.

Within this context of engagement and empowerment, I'm going to talk about something difficult, which is the long group discussion about race which began yesterday and continued the following morning. While I'd read a lot about race and privilege in the past, I'd never discussed these concepts with so many people from such a wide variety of backgrounds, and even though we were all activists with progressive views, I was truly shocked by how fraught our conversations were. Talking about race is really, really hard—and if it's hard for us, I figure that's worth sharing, given how necessary a conversation it is for the world right now. If we're going to commit to a just climate future, we have to address the historical and ongoing ramifications of colonial exploitation on a global level.

This is a massive subject and one of the ways we made our way into it was to unpack our individual experiences of privilege. This lead, frankly, to a discussion of shame and self-flagellation from those who identified as privileged—the majority of us—and segued into a discussion of the dynamics of privilege, identity, equity, and systemic racism. The subject of systemic racism was where, I felt, the workshops best connected back to the climate justice theme that anchors this camp, because while those of us born to financially secure parents in developed nations had no part in the circumstances of our birth, the fact that we've enjoyed the advantages of those circumstances means we have the responsibility to hold our policy makers accountable for those imperialist, exploitative pasts which made our countries powerful and wealthy at the expense of the global South.

So while tensions ran high today and people's feelings were hurt, there are still, I think, positive messages we can take from this together and then move forward. Leading up to COP21, we could, through our activism, focus harder upon historical accountability and what Naomi Klein popularized as 'a Marshall Plan for the Earth.' Developed nations are overwhelmingly responsible for the catastrophic overflow of emissions in our atmosphere, and are by extension responsible for endangering the lives, livelihoods, and homes of people in countries whose contribution to global warming has been negligible.

Today while I was in the workshop, I started thinking that sometimes the most difficult thing to do is to remember our common humanity—it's easier to be divided by our differing experiences or personal histories. Race is such a devastating conversation because our modern world is built upon millennia of unquestioned abuse and inequality. Luckily, our generation is questioning this more than ever before. The psychological ramifications of this questioning, and the reformulation of Western identity it demands, is dramatic. I felt very much today that as we unpicked the sore stitches of human history together, language itself began to unravel and become inconceivable as a tool for communication. It was hard to know what to do or say because the wound we were unveiling was so vast it covered everything; once you perceive the wound, it's all you can see. And then maybe only music is equal to it. So with love ,respect, and hope, I'm going to end with a song.

"We have to work hard! It will be a great action tomorrow!" enthused Gabriel, a member of the French organising team during our first session this morning. As we prepare ourselves for our trip out to the Isle de Sein tomorrow to protest dirty energy pushing back community-run renewable on the island, we've all started to prepare us for the BIG day this afternoon.

Although we are from different countries and we speak different languages if it comes to making banners, preparing wind kites, building totems or inventing new songs we put together our creativity and we came up with great ideas.

The team I was coordinating was asked to prepare a song and chants to bring dynamism to our procession. I've ended up cooperating with a bunch of French speaking activists and basically I was the only one who didn't speak their language. We've decided in the end to create the song in French, as the summer camp is taking part in Brittany. After quite a long brainstorm and some quickfire French discussions which I didn't understand at all, we finally managed to write lyrics for a song named "Le vent tourne" (The wind is changing). Everybody was so excited about our outcome that we were even singing our new song during dinner. After this day I can proudly say that my poor French vocabulary doesn't consist only of words like "bonjour" or "merci" but includes also terms like "changement climatique" (climate change) and "énergie sale" (dirty energy) .