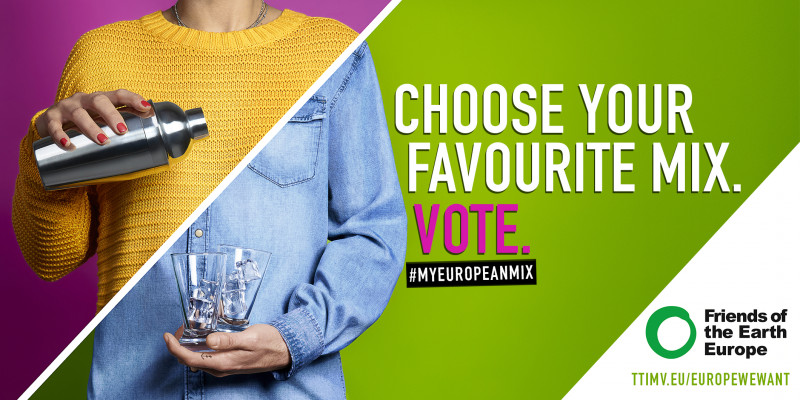 Bringing hope to the ballot box

Friends of the Earth Europe’s director, Jagoda Munić, writes about the importance of voting in this year’s elections for the European Parliament (May 23-26) and the need for a dramatically different Europe that puts equality, solidarity, democracy, care for our environment and future generations, and social, environmental and economic justice its heart.

Friends of the Earth Europe is partnering with the official ‘This Time I’m Voting’ campaign. You can sign up for elections news and events at www.ttimv.eu/europewewant

Here's a recipe for the future we all need.
Spoiler: It won't work without one *essential ingredient*...#MyEuropeanMix #ThisTimeImVoting pic.twitter.com/eD845hUeCs

It has been inspiring to watch youth rising for urgent climate action across the globe. The young strikers are saying what we all know and have been told by leading scientists – we have 12 years left to act to limit drought, floods, extreme heat and poverty for hundreds of millions of people. Youth are impacted people who demand urgent climate action and justice from world leaders now.

We would like to see this youth energy spilling from the streets into the polling stations in May when people across Europe will elect a new European Parliament. Many of the student protestors cannot vote, but they have the right to a future and a decent life. It is up to all of us who can to bring their message to the ballot box.

Despite scepticism towards the EU and its policies, the European elections remain a massive exercise in democracy the results of which will steer action on many areas of our lives and have impact beyond EU borders.
Friends of the Earth Europe believes this year’s elections are more critical than ever. There is much at stake in the next 5 years and we can’t afford to treat the vote in May like “elections-as-usual”.

With no time to lose in the climate battle, it is frightening that climate-denying and climate-sceptic parties are predicted to win more seats. Two out of three right-wing populist members of the current Parliament have regularly voted against climate measures. Half of all votes against resolutions on climate and energy have come from the right-wing populist party spectrum. This is why we need everyone who cares about the climate to use their vote in May.

An increase in far right and nationalist parliamentarians would also be bad news for freedoms many of us take for granted – like freedom of the press, freedom of assembly and the right to protest.

We are recently witnessing a trend of “shrinkage space” for civil society across Europe, and especially in Eastern Europe. In many countries funding is becoming more limited or harder to access, and there are clamp-downs on the right to protest and restrictions on advocacy. This is a dangerous trend and has implications for the future of European democracy if it continues. The European Parliament can challenge these trends. In the case of Hungary, MEPs already voted for sanctions against the Orbán government.

We need incoming MEPs to defend our freedoms and respond to the demands for climate action from the student strikes and citizen protests. They will have the power to change Europe’s energy, farming, waste and transport systems. They can help force the end of climate-destroying coal extraction and subsidies to fossil fuels companies. They can push for the EU’s trillion Euro 7-year budget to speed-up a just transition of our energy system.

The upcoming elections are a chance to send a loud message that equality, solidarity, democracy, care for our environment and future generations, and social, environmental and economic justice should be at the heart of how we live. This means saying clearly that Europe needs a radical change of direction. That people and planet – not profits of big business – should come first.

Across Europe Friends of the Earth members are organising debates, street exhibitions and other events ahead of the elections, bringing people together to discuss their visions for a kinder, greener, fairer Europe, and spreading the message “Vote!”

Is there a ready-made recipe for Europe? No, we think that Europe is a mix of different good ingredients. And everyone can choose their own personal flavour.
Different ingredients are what make Europe taste better.
Some of our key ingredients are: democracy, equality, climate action, and a good measure of hope and care.

Sign up for news from the This Time I'm Voting campaign