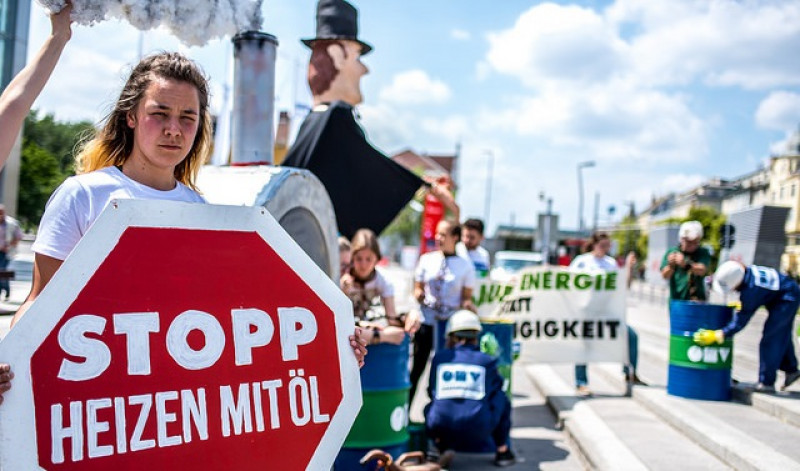 Global 2000/Friends of the Earth Austria campaigners have won a significant victory after forcing the Austrian oil and gas company OMV to end subsidies for oil heaters. OMV will by the end of 2019 phase out funds for a programme known as ‘Heizen mit Öl’ (‘heating with oil’), which promoted and gave financial payments for the installation of oil heating systems in Austrian homes.

The chief executive of OMV, Rainer Seele, was forced to admit that these payments are not compatible with tackling climate breakdown – neither with the Paris Agreement targets nor Austria’s own climate and energy strategy. OMV is a part state-owned corporation producing and marketing oil and gas.

Global 2000/Friends of the Earth Austria welcomed the decision, having campaigned for months to scrap the programme – but demanded an immediate end to the payments as well as national subsidies for clean heating systems. Other oil companies have made similar decisions, according to the group.

"This is a big step forward for renewables and a phase out of fossil fuels in Austria!"

Heating homes with oil is the most CO2-intensive heating system on the market. But the ‘Heizen mit Öl’ programme nevertheless called itself an ‘efficiency & climate initiative’, supporting each installation of an oil burner with €2,500-5,000. In total, OMV helped to install around 5,500 new oil heating systems each year, with €15 million of annual payments – or €61 million in total over four years.

Campaigners accused the programme of misleading consumers, telling them that installing oil burners was positive for the climate – despite being the most CO2-intesnsive heating systems.

It was important to stop the subsidy scheme now, as Austrians are expecting to replace 613,000 ageing fossil heating systems in the next few years.

The ‘Heizen mit Öl’ initiative was founded by the oil industry in 2009, just one year after the Austrian Government decided to phase out oil heating systems and federal states committed to end subsidies for them. At the same time, Austria was failing to meet its climate goals under the Kyoto Protocol and had to pay around €500 million for CO2-certificates.

The dodgy funding for, and OMV's involvement in, these polluting systems remained unclear for many years. But in the beginning of March 2018, as the Austrian Government was putting together a new climate and energy strategy, Global 2000/Friends of the Earth Austria published research uncovering the details, garnering high media attention. They found that oil traders pay €10 per 1,000 litres of oil for heating into a fund that serves ‘Heizen mit Öl’. As Austria’s biggest oil trader, OMV was both the biggest contributor, and was contracted to ensure financial flows to the scheme.

After Austria adopted the Paris Climate Agreement in 2016, leading energy experts demanded a phase out of oil heating systems. But ‘Heizen mit Öl’ instead increased the amount oil traders pay into the scheme to €11 per 1,000 litres and launched a greenwashing campaign to attempt to clean up oil’s dirty image, using TV, newspaper and radio adverts. It worked, and in early 2018 ‘Heizen mit Öl’ celebrated its 50,000th installation. This installation however took place in the federal state of Niederösterreich (Lower-Austria), which had announced a ban on oil heating systems in new buildings a year earlier.