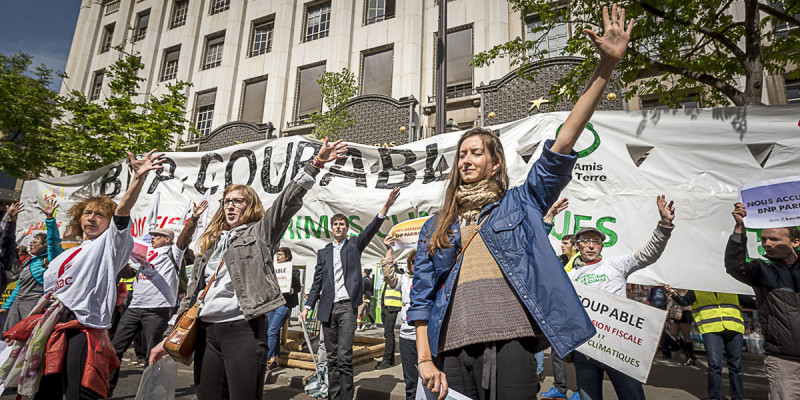 BNP Paribas belongs in the dock

Florent Compain, President of Les Amis de la Terre / Friends of the Earth France was fined a symbolic €500 today, a decision that the group condemns, for his role in the peaceful 'Faucheur de chaises' protest – a grassroots initiative to highlight the tax evasion of large financial institutions and banks like BNP Paribas.

Tax evasion costs France between €60-€80 billion a year in lost tax revenue – with the French bank BNP Paribas one of the largest beneficiaries from tax havens. This lost government revenue could be used to combat climate change. Instead BNP Paribas continues to provide financial support for fossil fuels and nuclear power – including the highly controversial Dakota Access Pipeline staunchly opposed by the Standing Rock Sioux Tribe.

Malika Peyraut, campaigner for Friends of the Earth France said: "It's ridiculous that an activist is prosecuted for taking part in peaceful protest, when banks like BNP Paribas continue to put profit before both people and the planet. BNP Paribas is the one that belongs in the dock."

Earlier this year, Jon Palais, one of the leaders of the Faucheur de chaises was prosecuted without charge. Florent Compain was then sued for his involvement in a protest at one of BNP Paribas' offices on the 6th of November, 2015.

Since BNP Paribas began legal proceedings, French civil society has responded with a new wave of peaceful protest, with thousands of participants across the country. More than 150 civil society organizations from more than 50 countries signed a public statement condemning BNP Paribas.