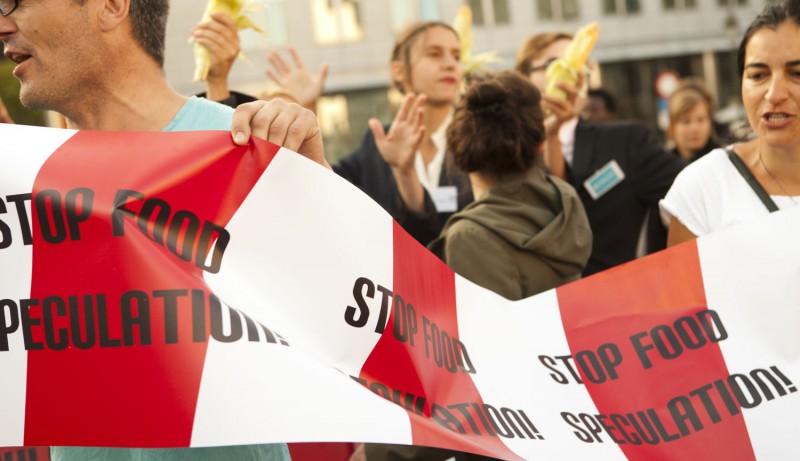 Food speculation by banks and financial institutions continues to contribute to rapid and unpredictable swings in food prices. Yet, corporate lobbying on the Markets in Financial Instruments Directive (MiFID) – which sets new regulations for financial markets – has undermined attempts to curb this destructive practice, according to Friends of the Earth Europe. This will allow speculators to continue profiteering at the expense of the world's most vulnerable.

A final meeting in Brussels between the European Commission, Council and Parliament yesterday that should have drawn discussions on the directive to a close, failed to reach agreement.

Information requested from key representatives of member states by Friends of the Earth Europe reveals intense lobbying on the directive – conducted predominantly by representatives from the banking, financial and energy sectors. This has ensured loopholes remain in the final texts, already approved by the European Council and Parliament, which will allow speculation to continue, according to Friends of the Earth Europe [1].

Anne van Schaik, accountable finance campaigner at Friends of the Earth Europe said: "Food speculation is costing the world's most vulnerable the food on their plates. Corporate greed has outweighed the interests of citizens."

The loopholes included the failure to set European-wide limits on the amount of shares a speculator can hold on the market, and to the type of financial products that can be traded. A lack of substantial reporting criteria for financial institutions will also hamper attempts to monitor food speculation, according to the organisation.

The World Development Movement has issued a new report stressing the UK government's active involvement in persuading the financial sector to lobby against stricter regulation.

Anne van Schaik continued: "After a long wait, information from Permanent Representations on lobbying by the corporate sector confirms our fears. The voices of people have been drowned out by intense corporate lobbying – undermining efforts to curb the destructive practice of food speculation."

The MiFID offered an opportunity to strictly regulate European financial markets. European policy-making must put the hunger of people before the greed of financial institutions. Friends of the Earth calls on negotiators to bring an end to excessive and harmful speculation, and to the environmental and social damage done by financial markets.

[1] Permanent representations from the Netherlands, the United Kingdom and Germany have provided material through the Access to Documents process

The Permanent representation of the Netherlands to the EU provided an overview of 24 emails including detailed suggestions on the negotiating text.

The Permanent representation of the UK to the EU provided email communications, meetings, letter correspondence and phone conversations from 147 lobby meetings.

Permanent representation of Germany to the EU provided a list of 28 email correspondences but no further information on the content, saying that more information will follow due time.

The information provided by the Netherlands and Germany are incomplete: meetings that have taken place are not included in the overview sent to Friends of the Earth Europe.

The European Council informed Friends of the Earth Europe that no meetings took place between Council and industry representatives in relation to MiFID.

Directorate General of Internal Market and Services provided Corporate Europe Observatory with a list of meetings with companies where commodity markets and position limits were discussed. The Associated for Financial Markets in Europe (AFMA), who speak out against position limits, are listed. Similar meetings were held with the Alternative Investment Management Association (AIMA), International Swaps and Derivatives Association (ISDA) and Goldman Sachs.

WDM: Exposed: How the UK government has colluded with the UK finance sector against legislation to curb food speculation