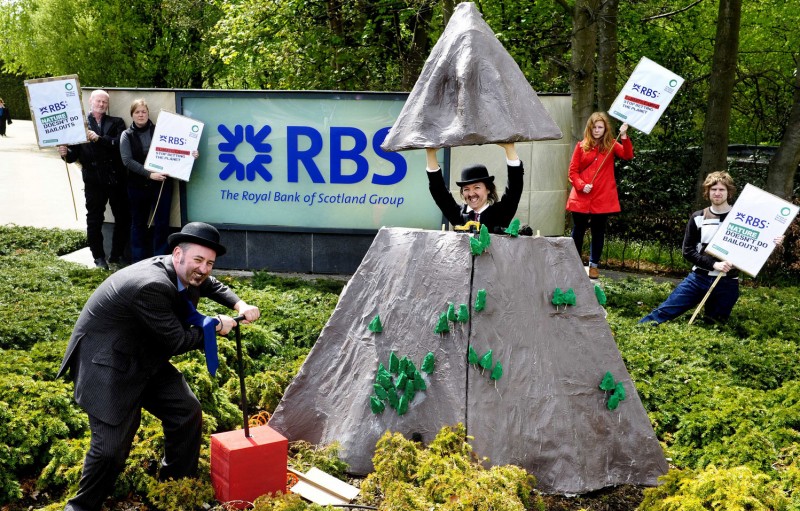 Friends of the Earth Scotland today went to the Royal Bank of Scotland (RBS) AGM to ask the bank to disinvest in funding mountaintop removal for coal mining.

They posed as two 'bankers' with a replica mountain and symbolically ‘stuffed’ their faces with coal to feed their fossil fuel addiction.

Speaking outside the bank’s global HQ, Paul Daly, corporate accountability campaigner at Friends of the Earth Scotland said: “The scale of these operations is enormous with over 500 mountains levelled to date. In the Appalachian Mountains explosives equivalent to that used in one Hiroshima bomb are detonated each week"

“We call on RBS to join the growing number of banks who have excluded MTR lending from their portfolio. RBS should not be lending money to corporations that predominantly work on extracting fossil fuels. This is financing an unsustainable future. Instead RBS should be leading the transition to a green economy, to tackle the growing threat of climate change.”

The debris created is then dumped into the adjacent valleys effectively flattening the horizon and changing the landscape forever. This wreckage is laden with toxic chemicals previously safely locked within the mountain. The coal extracted then must be cleaned to remove chemicals such as lead, mercury, chromium and arsenic. This cleaning creates another toxic by-product which is stored in vast lakes close to the excavation site.

Paul Corbit Brown, campaigner from Keeper of the Mountain said: “There is nothing ethical about mountaintop removal. It permanently destroys air, water, soil, communities and people's health. It has brought nothing but poverty and sickness to the communities in my home state."

RBS has been financing the corporations who engage in this local devastation to the tune of $362.5 million despite acknowledging the devastating impacts of the process. Friends of the Earth Scotland’s research has shown that RBS has also been underwriting loans to companies involved in tar sands extraction in Canada. This is part of RBS's larger portfolio, which, according to World Development Movement, finances fossil fuels to the tune of £35.5 billion.