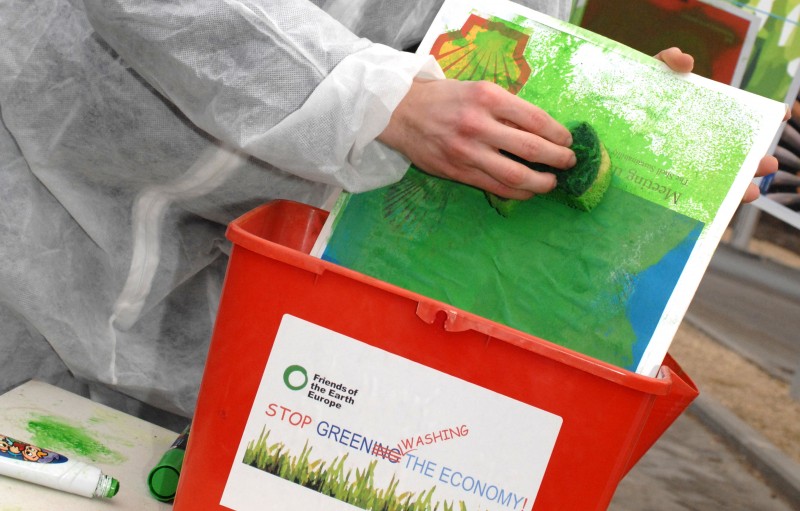 Brussels, September 26th - Friends of the Earth Europe today released The Exxon Files - an animation spoof exposing how oil giant ExxonMobil is working to prevent action on climate change. The cartoon's website, www.exxon-files.eu, asks people to add their support to a formal complaint about the company's misleading advertising.

The animation, a satirical version of the cult TV series The X-Files, features two fictional agents, Deny Fully and Rexx Tiller, of the Federal Bureau of Inconvenience, who are hired by ExxonMobil to hide the truth about the negative environmental impact of its activities on the planet. To achieve this they secretly fund climate change sceptic scientists, think tanks and lobbyists in Europe and the US.

ExxonMobil has been criticised by politicians and environmental groups [1] for backing organisations well-known as 'climate deniers', and in the U.S., the company's annual Corporate Giving Report lists many organisations actively hindering efforts to fight global warming [2]. Whilst ExxonMobil has not been forced to disclose who it is funding in Europe, some of the U.S. organisations listed have European operations, and other EU-based think tanks have admitted receiving financial support from the corporation [3].

Christine Pohl, Transparency Campaigner for Friends of the Earth Europe, said: "ExxonMobil invests millions of Euros funding think tanks and lobbyists committed to blocking internationally agreed policies to combat climate change whilst at the same time spending major sums on advertising designed to present itself as an environmentally responsible company. But the truth is out there and with the Exxon Files Friends of the Earth is exposing this hypocrisy in a humorous way."

Visitors to the site are urged to add their signature to a formal complaint Friends of the Earth is submitting to the Belgian Economic Affairs Minister about Exxon's advertising at Brussels Airport. In the ads, Exxon claims to be reducing its greenhouse gas emissions, despite data from its own Corporate Citizenship Report stating the contrary: Exxon's CO2 emissions actually increased by 8.7 million metric tons (over 6 percent) from 2003 to 2006 [4].

Paul de Clerck, Corporates Campaigner for Friends of the Earth Europe adds: "The adverts at Brussels Airport are only one example of ExxonMobil's deliberately misleading advertising campaign. The 'greening' of oil giant Exxon is nothing more than a slick public relations exercise. Instead of spending millions on manipulating the facts, they should make real efforts to reduce greenhouse gas emissions."

[1] For example, the Royal Society, Britain's premier scientific academy, wrote to Esso (the UK arm of ExxonMobil) in September 2006 to demand that the company withdraw support for dozens of groups that have "misrepresented the science of climate change by outright denial of the evidence". Read the letter at:
http://image.guardian.co.uk/sys-files/Guardian/documents/2006/09/19/LettertoNick.pdf

[2] ExxonMobil's Corporate Citizenship reports can be downloaded from:
http://www.exxonmobil.com/Corporate/Files/Corporate/gcr_contributions_public06.pdf)
In the U.S., the list of beneficiaries in 2006 included:

a) The American Enterprise Institute which received 240,000 dollars from ExxonMobil in 2006.
The AEI is a powerful neoconservative think-tank which had offered scientists and economists in the U.S. and Europe 10,000 dollars each for articles meant to undermine the report published by the United Nations Intergovernmental Panel on Climate Change (Source: Scientists offered cash to dispute climate study, The Guardian, February 22, 2007)

[3] ExxonMobil has, for example, in the past funded:

a) The Centre for a New Europe has received 170,000 dollars from ExxonMobil since 1998 (Source:
ExxonSecrets database http://exxonsecrets.org/html/orgfactsheet.php?id=106). CNE runs an Environment Forum aimed at "debunking the moral panics and junk science that all too often dominate today's environmental debate". The programme is run by, among others, Edgar Gürtner, who has made claims such as, "CO2 doesn't heat up the atmosphere" and "the slight temperature changes recorded in the past century do not demand far reaching restrictions in order to save the earth's climate" (Source: CNE Environment
http://www.cneenvironment.org/blog_archive/archive_2007_gartner.htm)

[4] ExxonMobil's Corporate Citizenship reports can be downloaded from:
http://www.exxonmobil.com/Corporate/Citizenship/citizenship.asp 2006